This is a side-by-side comparison of the music videos for Michael Jackson’s ‘Beat It’ and Weird Al Yankovich’s ‘Eat It’. Unsurprisingly, the ‘Eat It’ video is nearly identical shot-for-shot. You know, because that was the goal. I assume it was either this or footage from someone who swallowed a camera, and cameras that small didn’t exist in 1984. “We’ll go with a shot-for-shot parody,” I imagine Weird Al deciding, unwrapping his lips from the lens of a shoulder-mounted JVC GR-C1 camcorder like Marty McFly uses in Back To The Future. 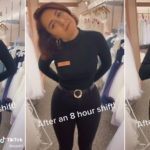 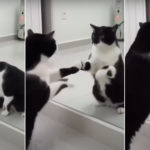