This is a film believed to have been shot by early cinema pioneer Georges Méliès around the turn of the 20th century of the beaches of Normandy, France that’s been AI enhanced for your viewing pleasure. Some more details while I further zoom and enhance the footage myself looking for time-travelers:

Time travel back 122 years to the beaches of Étretat and Le Tréport in Normandy France.

Before the Riviera became popular, Parisians headed to the sea fronts of Normandy. The film begins with passengers arriving at Mers-Le Tréport train station. Observe the mobile beach huts for the more adventurous women to change into swimming costumes.
The huts were then rolled down to the waters edge for a secluded dip in the water.

122 years ago — that’s crazy. Even crazier? I’m pretty sure I spotted the woman who lives in the apartment above me in the video. She’s got to be at least 200. She tries to say she’s not a witch, but that’s exactly the sort of thing a witch trying to convince you that she isn’t one would say. Plus I’ve smelled the potions she cooks coming through the vents. Homemade chicken soup my ass. 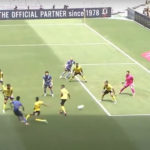