I'm pretty sure it told me to stab my roommate.
Auditory Illusion Changes Sound Of What You Hear Based On Phrase You’re Reading

This is a video demonstration of an auditory illusion of a chant that appears to change what’s being said based on the phrase you’re currently reading, including “Bart Simpson bouncing,” “rotating pirate ship,” “that isn’t my receipt,” “lobsters in motion,” “lactating pirate ship,” “that is embarrassing,” “lactates In pharmacy,” “I’m chasing Martian,” “baptism piracy,” and “that isn’t mercy.” Some of them worked for me, others did not. Although if you want to know what’s actually being said in case it isn’t obvious it’s SPOILER SPOILER SPOILER: That is embarrassing, an old football (soccer) chant originating from the Derby County Football Club in Derbyshire, England. So yeah, the dress isn’t blue and black OR white and gold, it looks grey strewn in the shadow of my king size waterbed HIYO I’m a real lady’s man please don’t let my girlfriend read this it would suck to die so close to the weekend. 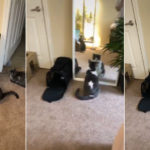 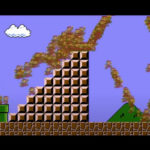