Fancy Feast those precious angels, STAT.
Woman Adopts Two Special Needs Kittens After They Were Abandoned By Their Mother

This is a video highlighting the lives of Otter and Bunny, who were adopted by Caroline Grace of Baby Kitten Rescue after they were abandoned by their mother. Both cats have underdeveloped front legs that end around the elbows, but Otter also has a hole in his skull and needs to wear a special helmet (which was sourced from some loving souls on social media — apparently there are some) to prevent brain injury. Per Caroline:

He’s been wearing that helmet pretty much non-stop. He doesn’t try to scratch it off or pull it off…He’s really good about it and we have to change it and clean his head. He’s not in any pain or discomfort he does not have any trouble with balance. He does not have seizures which is incredible and kind of a miracle considering his condition. He’s the happiest little guy.

Happy endings. You know, my girlfriend and I have been kicking around the idea of buying some land and starting our own animal rescue in the country. Yesterday I jokingly asked if she wanted me to just buy the farm and she said yes, and I laid awake all last night wondering if she’s familiar with that idiom or not. 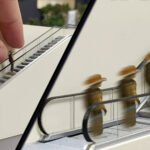